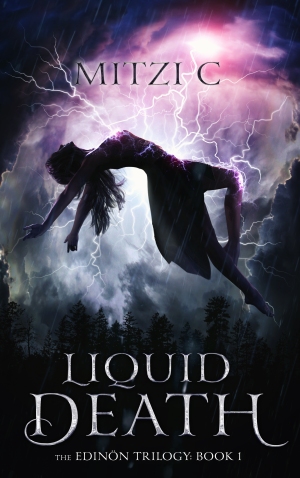 Author of the Edinön Trilogy, Mitzi C has recently published her new novel (and the finale to her series) Burning Space this October! This series has a little bit of everything – romance, sci-fi, fantasy and badass characters with some pretty cool powers. You can check out my review of the first instalment of the Edinön Trilogy, Liquid Death here!

Here’s a brief Q&A with Mitzi, all about her new release of Burning Space, the rest of the Edinön Trilogy and her plans for her future books!

Congratulations on the recent publication of Burning Space! This trilogy is your first published series – what made you want to begin with this story?

Thank you! And thanks for having me on your beautiful blog. ❤ I was in the midst of another series, an epic sci-fi/fantasy, when I decided to take a break from it and start something new. Liquid Death sprung from an idea I had after reading a standalone romance that left me feeling bitter and dissatisfied. I started writing Liquid Death – formerly titled Shooting Stars – without any real idea where it was going; I just needed to get it down. When I eventually finished it, I decided to make it my first published work because it was simpler than the previous series I had been writing. I knew that I would be able to finish the trilogy within a few years. The first-person, alternating narrative is easy for me to get into, although I hadn’t anticipated the growing complexity of the story as I progressed toward the finish line. Liquid Death was simple enough for me that I deemed it less of a risk to publish first.

These books don’t really fit directly into just one genre but crossover a few (romance, fantasy, sci-fi, for example) – what made you want to combine these genres? Or was it not really a conscious thought and you just let the story flow?

I didn’t write these books with the goal to combine genres in mind. I wrote what I love to read, and that is mainly fantasy/sci-fi with a side of romance. Crossing multiple genres has actually made marketing more difficult for me, since there are readers who love sci-fi but hate romance, or love fantasy but hate sci-fi, etc. The idea for a story will always come first – then the categorization for the purpose of finding a suitable audience. It was partially a conscious decision but I also let the story flow without thinking about how it would be categorized in the end.

Without giving too much away, the Edinön Trilogy features some characters with extraordinary powers! Which one was your favourite to write?

Kandi’s powers were definitely my favourite to write because they came with so many drawbacks. Most people would like to imagine having powers without consequences, but as I conceptualized Kandi’s abilities, the negative aspects of them became even clearer. The more her powers grew, the greater her burden would become. It was a tremendous balancing act for me: on one side I had Kandi’s expanding powers, and on the other, I had her mental trauma and all-powerful enemies. What would you do if you carried the unbearable weight of the world’s pain on your shoulders? Would you be proactive and stand up to the man who tortured you from infancy? Would you care about a single individual’s suffering even while you suffered pain of every kind? Or… would you curl into a ball and refuse to lift your head? I know that if I was Kandi, I would shut down completely. I wouldn’t just be mute – I’d be immobile. The fact that she even gets out of bed in the morning without being compelled is inspiring alone. I can barely manage it with my cushy life as it is.

How did you come up with the idea of humans with superpowers and the specific journey that Kandi and Juan embark on in the first book? Do you get inspiration from somewhere specifically?

Humans with superpowers are my favourite thing to write about. When life is dull or difficult, I frequently imagine possessing superpowers. The remote is on the other side of the room? If only I could summon it toward me without moving from the couch… Stuck in a classroom with a droning instructor? What if I could slam the door with my mind and scare a few people? The list goes on…

Kandi and Juan’s specific journey was inspired by many things: my crippling depression and anxiety in high school, frustration with a book I had read at the time, certain lessons from my religion, and music. I wrote Kandi’s story first, as she was me in high school. In the second draft, I developed Juan’s character and grew closer to him. Their journey is all about shouldering a great burden, accepting your limitations, and utilizing the gifts you have been given to create a better world. It was additionally inspired by the idea that you are much more than you think you are. There is potential within you for heroism, regardless of your circumstances. As dismal as Kandi’s and Juan’s circumstances appeared, all they needed was a spark of hope. Hope is the antidote to all our anguish. 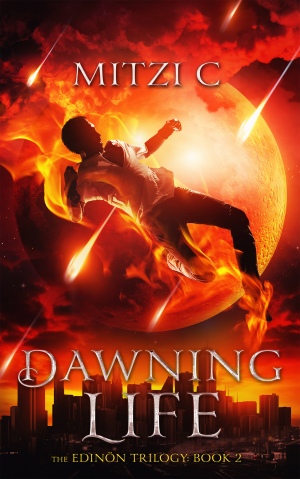 And, it has to be asked, if you could have any superpower what would it be?

I want to say telepathy, but I don’t think I could handle it, haha. I would settle for telekinesis – the ability to move things with my mind. That would come in handy on innumerable occasions, I think.

Another out of the ordinary thing would be the name of your main character, Kanidie. This isn’t a name that I’d heard before, was there some specific inspiration behind wanting to use it?

Kanidie branched off (and is pronounced similarly to) the name “Kennedy.” Its significance is in how it’s spelt: Kan-I-Die (Can I Die). Kandi’s immunity to death is mentioned in the first paragraph of the first chapter. Her name had to be unique and meaningful somehow. Her nickname, “Kandi,” actually came first. Since it denotes sweetness and innocence, it was the perfect derogatory name for her father to use while carving into her as a little girl. No one ever called her “Kanidie” but her mother, Talia, and the name, unfortunately, died with her.

So, Mitzi, with the last book in your trilogy, Burning Space, having just been released, can you tell us anything about what you have planned for the future? Will we hear more about these characters anywhere?

Sure! I have already begun a series of “deleted scenes” on my blog where I will write short stories to fill in gaps I have left in the series (e.g. events that occurred between each book, or events before the first book began).

Do you have a new series in mind? Will you be sticking to a similar theme or branching out into something new?

Yes! I have a new trilogy in the works, starting with Gray Haze. I am going full fantasy with this one. It will contain elements of horror and romance as well, so I am diverging a bit from sci-fi. The themes will be more about power, knowledge, and secrets. The story will be told through a variety of characters, including Marcus, the intellectual problem-solver, Amora, the passionate, maternal figure, Malik, the gifted, morally-conflicted character, and so on. I am delving deeper into the world-building side of fantasy than I did even in Burning Space, with monsters and magic to boot. If you want to help me edit as I go along, I’ll be posting a chapter a week on bookboro.com up to chapter 25.

As I just mentioned, you’ve now published three books in the Edinön Trilogy – do you have a favourite?

Burning Space! After working on this trilogy for years, it feels good to finally be done. The third is my favourite because I think my writing has markedly improved since I wrote Liquid Death, and you could say the setting is out-of-this-world. 😉 Plus Kandi and Juan are more powerful and mature, so their conflict is more external (and insurmountable) than in the previous books.

Perhaps an even more difficult question, do you have a favourite character from the series?

Ohhhh, it’s really tough to say. Juan holds a very special place in my heart, as he was much less serious than Kandi, and he didn’t lose hope in the face of grave danger. He thought of others before himself and was humble in spite of his gifts. Kandi was more complicated. While writing through her, I constantly had to think about the torture she endured as a child and the pain she faced as a consequence of her own powers. Her mental state was a roller coaster, and although painful, it was fun to explore. Her eventual acceptance of who/what she would become was a highly gratifying point to reach in the story. Brock was fun to write as a well! It’s always fun to write about a crazy person since basically anything goes. Leyla Hendricks and Leisil (Burning Space) were very interesting to me. Kandi’s father is definitely up there, but I can’t give too much away. 😉 I am also quite fond of Yuter, Juan’s best friend in Burning Space.

I will say that Juan was my favourite to write overall – probably because in him there was more room to grow and mature, both mentally and physically, and because he was the more “down-to-earth” side of the main duo, which made him more relatable. It was interesting to write about Kandi from his perspective, especially considering the fact that I am a female and had to think like I was a male as the romance developed between them. Juan was an inexhaustibly multi-dimensional character that grew organically over time.

Your books are self-published. What’s your experience with this process been like? 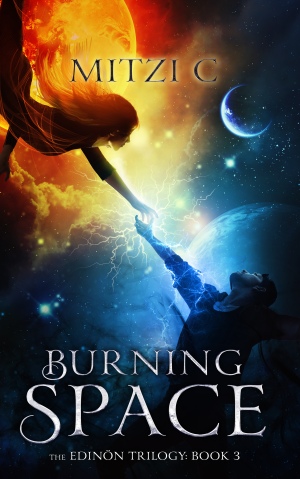 Easy at first! With just a few clicks, anyone can publish a book these days. It’s quite amazing! Unfortunately, I published Liquid Death before I knew anything about marketing, so obviously, it has yet to gain traction with an audience. The process of trying to expose myself on the Internet to sell more books has been excruciating. The anxiety that accompanies this side of self-publishing is something else for me. But I shall persevere!

Would you recommend self-publishing to other aspiring authors?

Definitely! Just keep in mind that you are going to have to spend a lot of time Not Writing in order to reach enough readers to make a living. Research as much as you can. Plan ahead before you publish. I am certainly not in a place right now where I could give more specific advice than that, haha. I believe it is a worthwhile pursuit, however, so if this is what you aspire to do, go for it! Many people find success self-publishing.

Mitzi can be found on twitter and over on her main blog, where she posts writing updates, writing tips and deleted scenes from her own books.

You can purchase Burning Space here or check out the rest of the Edinön Trilogy on Amazon here (available in ebook edition).

Book reviews and recommendations across a variety of genres, giving you the inspiration to discover your next page turner ☁️ View all posts by hannnahsbookshelf